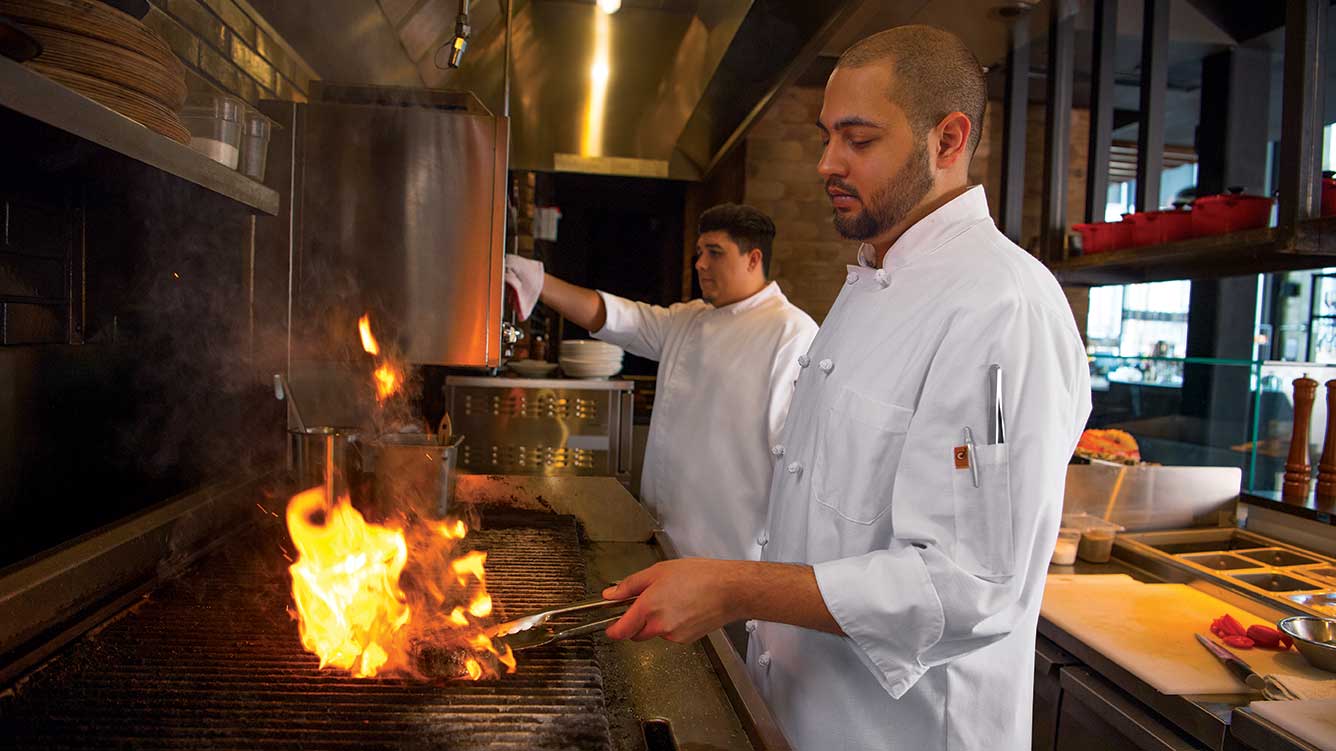 Chef’s uniforms have a rich history, dating back thousands of years to the world’s earliest chefs. Much of the chef’s uniform is practical, such as why chefs wear striped or checkered pants, while some components are simply symbolic. The entire ensemble is designed to provide a professional appearance, with built-in protection and functionality to handle the culinary mastery taking place in the kitchen.

Read on to learn more about the history behind each piece of a chef’s uniform so you can take pride in the little details that make this outfit one of the most esteemed around:

Why Do Chefs Wear Uniforms?

A chef’s uniform is one part practicality and one part professionalism, designed to emphasize teamwork and restaurant culture in the kitchen. Chef uniforms:
• Provide protection from kitchen hazards like heat and spills
• Promote a professional and clean image
• Establish status and hierarchy in the kitchen
• Unite a kitchen team

One of the earliest illustrations of a chef in uniform was in the illustrated version of Geoffrey Chaucer’s “The Canterbury Tales,” published in 1483. The cook depicted in the book is wearing an apron.

In “The Debate Between Pride and Lowliness,” written around 1586 by F. Thynn, the author writes that a man wears a “white knitt cappe” and is judged a baker by trade. In the Victorian era, illustrations and prints showed chefs in white clothing with a white cap. In the 1852 book “A Little Dinner at Timmins’s,” by William Makepeace Thackeray, a chef is described as wearing a crimson velvet waistcoat and a white hat.

However, the history of the chef uniform dates back much further than those references. In ancient Assyria in mid-7th century BC, chefs were considered esteemed members of the court. Because chefs had the power to poison those they served, they were carefully selected and only employed when they were trusted. In the royal household, cooks wore a hat similar to a crown, but that was made of cloth and without jewels.

In the third century A.D., when the Byzantines invaded ancient Greece, chefs fled and stayed at Greek monasteries. According to “Passion of a Foodie – An International Kitchen Companion,” by Heidermarie Vos, chefs in hiding dressed as priests and wore similar stovepipe hats. After the invasion, the chefs continued to wear the hats as a symbol of defiance. Later, Romans invaded Greece and took chefs with them, bringing both the chefs and their hats back to Rome.

Today’s chefs wear evolved versions of early chef’s uniforms, but just like many centuries ago, the chef’s uniform continues to command a level of respect and perfection in the kitchen. Let’s go a little deeper into the history of the main aspects of a chef’s uniform:

Chef Coats are typically made of heavy cotton or polyester to insulate from heat. They’re also typically double-breasted to cover up spills. In 1822, two chefs were pictured in a double-breasted jacket, a chef’s hat, trousers, and an apron in French celebrity chef Marie-Antoine Carême’s book La Maitre D’Hotel Francais V1.

The advantage of the double-breasted design is if the front of the jacket becomes stained, the flap can be reversed so that the dirty one is hidden behind to create a better appearance. It’s almost like doubling the mileage out of a work uniform, with a jacket that’s clean for twice as long. Two layers also offer improved protection from heat, spills, steam, and splashes.

Chef jackets with long sleeves protect arms from burns and enable the chef to use the sleeve as an oven mitt if they have to touch something hot or need to protect their hand when reaching over an open flame. Long sleeves also offer improved functionality with extra space for things like a thermometer pocket.

One of the most popular chef’s uniform colors is white because it symbolizes cleanliness and perfection while also helping to deflect heat. You’ll also find chef 's jackets in black these days, since black hides the appearance of stains. That’s a good thing for chefs working in open kitchens where customers can see them hone their craft. Today, however, uniform color is mostly a matter of style and preference.

Chef’s jacket buttons are often made of knotted-cloth, as they offer an elegant look while also holding up to frequent washing.

Chef hats have many sensible purposes. They prevent hair from falling into food, catching fire, or getting caught in equipment. Chef hats also absorb some of the sweat from a chef’s brow while the air within them keeps heads cool in hot kitchens.

A chef’s hat is also called a “toque.” It was Carême who presented the idea of inserting a round piece of cardboard inside a floppy cap in the kitchen. The early floppy caps evolved into tall pleated toques, with some traditions stating the more pleats in a hat (there can be up to 100) or the taller the hat, the more experience the chef had. Again, white is traditionally viewed as a color of hygiene, which is why many toques appear in white versions.

Tall white chef’s hats aren’t the only variations of kitchen headwear, though. During the Middle Ages in England, chefs wore black hats because they had to tend to meats in wood-burning hearths. The black color helped conceal caked on of soot and ash while the folds in these hats allowed chefs to carry food on their heads from the kitchen to the dining area.

You’ll also find beret-style hats and skull caps in kitchens around the world. Anything that stays put, is comfortable, and keeps hair out of food and away from hazards gets the job done.

There aren’t too many traditions when it comes to chef pants, but a few key qualities have endured throughout the years.

1. Comfort. Chefs don’t have the time to deal with uncomfortable pants in the kitchen. Their clothes are the last thing they need to worry about when orders are piling up and food needs to go out. Loose-fitting chef pants with elastic waistbands do the trick.

2. Flexibility. Chef pants should encourage movement not restrict it. Flexibility, lightness, and durability are the main selling points for this part of a chef’s uniform.

3. Professional appearance. Stains and spills are never cool. A checkered pattern or striped style distracts the eye from spills.

A professional kitchen is one space where it’s cool to wear baggy clothes. As long as chef’s pants are loose and supply chefs with room to breathe and move, they minimize hassle and enhance performance when orders are flying in.

Create Your Own Classic Look in the Kitchen

Put together a chef’s uniform that enables you to move, feels like a dream to wear, and keeps you looking like a boss in the kitchen with Red Kap food and culinary services workwear.

WE USE COOKIES TO PROVIDE AND IMPROVE YOUR EXPERIENCE, FOR ADVERTISING, AND FOR OTHER PURPOSES. CONTINUE USING OUR SITE IF YOU’RE OK WITH THIS, OR READ MORE IN OUR PRIVACY POLICY.